From Marriott Rewards, SPG and The Ritz-Carlton Rewards to Marriott Bonvoy®

In February 2019, Marriott International launched its new travel programme. Marriott Bonvoy is the new unified loyalty programme as a result of the merger between hospitality giants Marriott, Starwood and The Ritz-Carlton. Three loyalty programmes becoming one.

The programme is an unrivalled travel programme that goes beyond rewards to connect members to more of what they love. Just like the travel programme that it represents, the Marriott Bonvoy brand encapsulates the ambition to bring personal fulfilment through good travel to millions of members and travellers around the globe.

Since the company foundation in 1927, where the founder J. Willard Marriott had nothing but a nine-seat A&W root beer stand, Marriott International has come a long way. From the historic shift into the hotel business in 1957, to then becoming a global enterprise over the next 25 years with multiple brands under one company, to becoming the world’s largest hotel operator by 2016.

Today, Marriott has 30 brands with a presence in over 130 countries. With the launch of Marriott Bonvoy, guests experience member benefits across over 7000 hotels and resorts worldwide. Marriott Bonvoy has partnerships with reputable brands such as Emirates Skywards, Mastercard with Emirates NBD, Manchester United and the NFL.

While other hospitality groups such as Hilton, Hyatt and Accor all have loyalty programmes, Marriott Bonvoy offers an unparalleled brand portfolio and presence, where guests can earn points and redeem unique member experiences such as Moments that can only be purchased with points.

Working closely with the Marriott International MEA Regional Office and HQ in the U.S.A, JansenHarris was intricately involved in the transition process over the last three years. From creating educational collaterals, to workshops and branded touchpoints for internal activations to finally revealing the new brand, name, brandmark and identity elements to over 450 associates across the Marriott International MENA Regional Office.

It was crucial during the transition period to integrate all associates to become part of one company, especially for those that joined from a Starwood or a Ritz-Carlton brand – from being three distinctively different brands and three loyalty programmes to one. During that time, multiple phases for the loyalty programme were implemented. At first, the three loyalty programmes were kept separate but members of SPG (Starwood) and The Ritz-Carlton were able to earn points when staying at a Marriott property and vice versa. Before launching, an interim solution was used with a tri-logo lock up, promoting one loyalty programme, for which JansenHarris developed the creative for an internal launch event and several activations such as the Marriott pop up stand at the Dubai Jazz festival 2018.

The integration process required each property system globally to switch over to the new Marriott system and train associates on the new loyalty programme. One of the biggest challenges was to unify associates from three different brands and create a mindset of being one. Hence, it was crucial to create the right educational.

JansenHarris helped the client to bring these programmes under one unified banner and achieve being the world’s largest travel programme. Creating brand equity for a newly launched brand, always starts with the company’s associates. Last month, Marriott Bonvoy celebrated its first birthday and you can certainly feel a sense of unity amongst associates, you can even hear people greeting each other with “Bonvoy”.

Since the launch, the brand has been very well received in the market, having launched several successful campaigns, activations and partnerships in the region such as the Marriott Bonvoy® World Mastercard® Credit Card with Emirates NBD and Your World Rewards with Emirates. 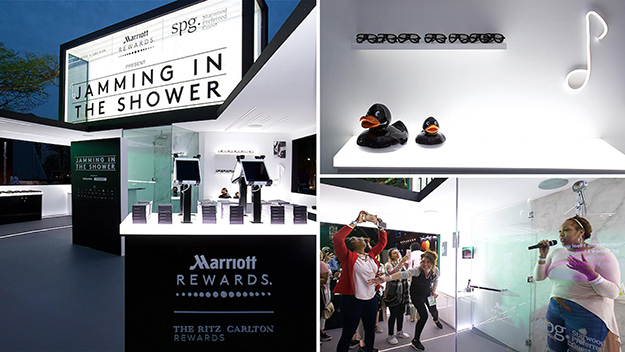